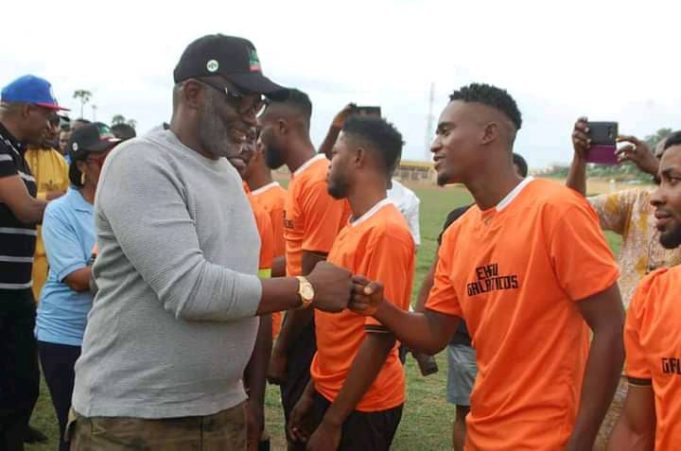 One of the biggest footballing event in Ekiti state began yesterday with different clubs coming around to spread their tentacles.

According to Rt. Honourable Femi Bamisile, the sponsor of BAFEM cup 2021, he said the major reason for the competition is to bring unity in the state especially amidst youth after several bad activities that’s happening in recently in the country.

While speaking with Pelumi Abiara, before the Match between Ikere united and Eksu Galacticos, expressed his delight to sponsor the football competition which he believed it would result to growth of grassroot football and  development of sport chaps in the state.

The match between Eksu Galacticos and Ikere united began around 4pm yesterday at the Oluyemi Kayode stadium. The match which was said to be the most entertaining footballing activity of the day got fans and soccer lovers on their feet throughout either halves of the  game.

Eksu Galacticos who were runner-up at the just concluded Aiteo’s cup qualifiers on Monday bowed to the new resuscitated club Ikere united in a 3goal thriller match.

In the the 20th minutes of play, Eksu Galacticos got the lead with Thompson Olakunle’s cross in the box that was converted by Oyetunji Oluwasegun. The university boys began to push for a second goal but were denied till the end of the first half.

In the 75th minutes, Damilola Aluko leveled the scoreline for Ikere united as the fans who were almost losing hope jumped for joy and sing praises of the player.

The Ikere boys who were still ruthless after equalising was salvaging every attempts of the university boys to shine again in the second half.

And towards the end of the match, Bola Idris boys sealed the win as the University boys player Ogungbade gave the ball away which saw an Ikere united player take advantage, set a through pass to Igbekele Ebenezer and rolled the ball into an empty net.

Nobody would have belived a comeback for Ikere united within 15minutes of the match yesterday.

While speaking to Ikere united coach after the game, Coach Bola Idris said his experience did worked for him in the game. The gaffer went further that the duo who scored and Dotun Aladesanmi the captain of the team were his players in phoenix. “When I got the Ikere united job in less than two weeks I brought them on board so they could deliver for me because I trusted them”.

According to Babajide Coupon, he said “I never expected this result, so painful we lost our first game to Ikere united”.

In other hand, the female team of Eksu known as Lioness defeated their counterpart Fuoye Drazzlers 1-0 goal by Empress Faith in the last minute of the game to stay top of their group.

Governor Sule To Nasarawa United – You Ramain My Champions