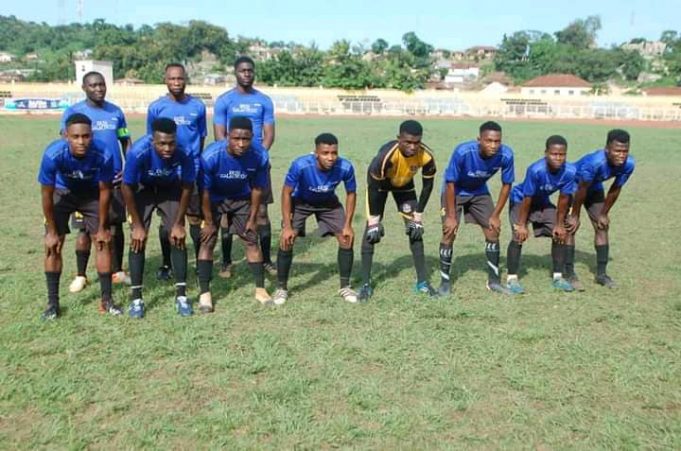 Haven lost the first match in the competition last month,Babajide  Coupon boys became shaky due to the standard the team has raised herself in Ekiti state. Nevertheless, they picked up themselves by securing 3point in their second match last week to keep Knockout stage hope alive which they eventually sealed yesterday at the Oluyemi Kayode stadium with a 2 nil victory over Liongate FC.

It was an high tension match although Liongate’s fate have been determined after their 4 nil defeat to Ikere united last week, but a little reinforcement happened in the team despite that it all lasted for the first half when the University boys began to shower massive attack on “feeble hearted” defenders and goalkeeper in the second half of the game.

During the first half of the game, both teams were even; the university boys didn’t play an entertaining football as the Galacticos became sloppy at attack with several fouls and miscalculated passes credited to the boys.

Babajide Coupon was quick to make double substitutions immediately the second half began to reinforce his side attack. Ayilara Tope and Ojo Samuel both came in for Esohz Emmanuel and Abiola Warriz to change the wave of the game.

The dreadlock was broken at the early minutes of the second half when Obasa Iyanuoluwa’s cross from the right flank fell from Liongate goalkeeper Folarin Olamilekan for Akande Suraj to effortlessly tip into the net.

The goal saturated the game as both sides began to speak with their footwork. Haven played 16 minutes in the second half, Aiyekhu Opeoluwa powered a well-defined cross that was headed by Obasa to double the lead for the university boys.

While speaking with Coach Akingbemisilu Akinolu said poor officiating affected the flow of the game. The gaffer said eliminating from a competition with zero goal and point do happen in football.

He went further that “In football you win, draw and lose all we need to do is to go back to our drawing board and restrategize for next football event” Akin also buttressed his point that his players has never played in such a competition before which tend to be a major reason for their naivety.

Meanwhile, Babajide Coupon said their plan was to win the match which they did. The gaffer went further that the result of other group member (Ikere united Vs Ado United )  wanted to affect their concerntration but it ended up the way they planned.

Both Ikere united and Eksu galacticos proceed to the next round of BAFEM cup.

All Is Set For 2021 Remo Mini Sports Festival