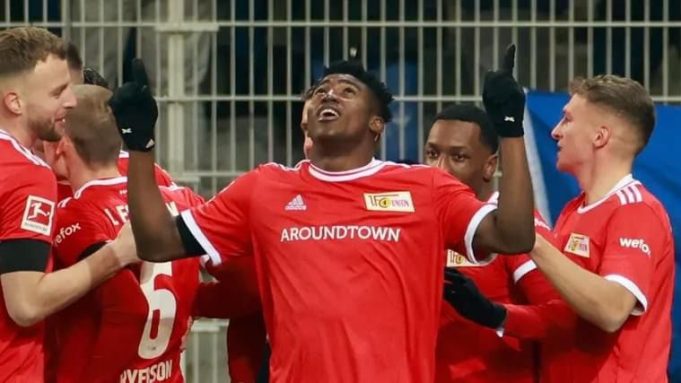 Super Eagles striker, Taiwo Awoniyi have savaged a point for Union Berlin against struggling Stuttgart side as they were held to a draw in a Bundesliga match on Saturday.

Awoniyi netted a first-half penalty, but Union Berlin could not hold on to win as Stuttgart forced a late 1-1 draw in the week 26 encounter.

Awoniyi bounced back from the costly mistake he that made during Union Berlin’s 1-0 loss to Wolfsburg after he scored an own goal in the league gam a week ago.

He has taken his goal tally this season to 11 Bundesliga goals in as many game so far.

Two other Nigerian players were also named in Union Berlin’s matchday squad for the match as Suleiman Abdullahi, recalled midway into his year-long loan deal at Eintracht Braunschweig and Anthony Ujah travelled with the team.

Union Berlin currently sits 7th on the league table and will travel to Munich on Saturday to face Bayern Munich in their next league match.