African women’s defending champions Super Falcons suffered a rude shock on their opening game of the 2018 AWCON when they lost 1-0 to Banyana Banyana of South Africa in Cape Coast today.

It was only the second win by South Africa in 11 meetings with Nigeria at this level.
Thembi Kgatlana scored a brilliant match winner for the South Africans five minutes from time.

France-based striker Desire Oparanozie ought to have given the Falcons the lead after half an hour after she fluffed an open chance after she was set up by Asisat Oshoala.

Nigeria’s next game Group B game will be against Equatorial Guinea, who were only re-instated in the championship after they had initially been thrown out of the competition. 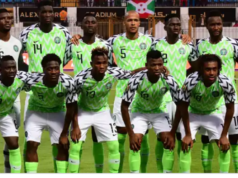 NPFL: Second Stanza resumes as Boys will be separated from the Men