The permutations are thin and tight, ahead today’s second group match for the Super Falcons, against Shepolopolo of Zambia at the 2018 African Women Cup of Nations in Ghana.

Both sides enter the tie with different fate, as the Falcons surprisingly lost 1-0 against South Africa in their first match, while the Zambians amazingly beat tournament favourites, Equatorial Guinea 5-1 same day.

That sets the stage for a game of varying potentials, as Nigeria need to win to avoid elimination, while Zambia will be desperate to consolidate and gain their first ever ticket to the AWCON semi-finals.

That translates to mean the Falcons, eight-time champions and current holders of the title, face an early exit in Ghana, following their opening group loss against South Africa.

With two-time winners, Equatorial Guinea conceding five against Zambia in the other Group B match, both sides will fancy their chances against Nigeria and the Falcons will have to dig very deep to scale through.

AWCON 2018 also stands as Africa’s qualifiers for next year’s FIFA Women’s World Cup in France, but Nigeria now face the ignominy of missing out on that as well, since only the top three will pick tickets.

This arises sequel to a shock victory for Banyana Banyana against the Falcons in Cape Coast, Ghana, just a day after both country’s male teams played out a nerve-wrenching 1-1 draw in a 2019 Africa Cup of Nations qualifier at FNB Stadium in Johannesburg.

While Nigeria held bragging rights after Saturday’s game at Soccer City, from which the Super Eagles qualified for the AFCON 2019 with a game to spare, despite having lost the first leg 2-0 at home in Uyo, the South African ladies turned odds on their head with a shock victory in Ghana.

It was only the second win by South Africa in 11 fixtures against Nigeria at this level, after Chrestinah Thembi Kgatlana scored a brilliant match winner for the South Africans.

The Falcons, who failed to win only two of the previous ten editions of the tournament, dominated the first Group B game of the Nations Cup from kick off but wastefulness in front of goal was their undoing.

Early signs of a capitulation showed when the South Africans were gifted two chances to score in the first half after some sloppy defending, but they failed to punish the Nigerian.

France-based striker Desire Oparanozie ought to have given the Falcons the lead after half an hour, but she fluffed a big chance after she was set up by Asisat Oshoala, three-time African Female Footballer of The Year.

Nigeria’s first chance to score came in the 33rd minute when Oshoala teed up Oparanozie but the the last edition’s top scorer blasted wide.

South Africa’s Jermaine Seoposenwe was close to opening her account just before half time, but Osinachi Ohale cleared the ball bravely as the Bayana Bayana striker was set to strike the ball inside the Nigerian box.

Oparanozie then spurned another chance four minutes into the second half and failed to give Nigeria the lead after her diving header went wide following a promising build up.

Kgatlana then broke the deadlock with six minutes to go as she pounced on a beautiful pass into the Nigerian box and unleashed an unstoppable shot beyond Tochukwu Oluehi. 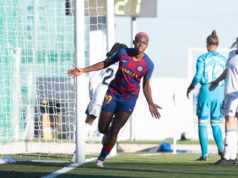 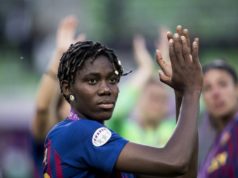 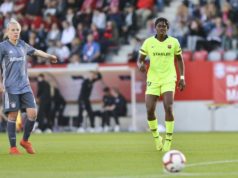