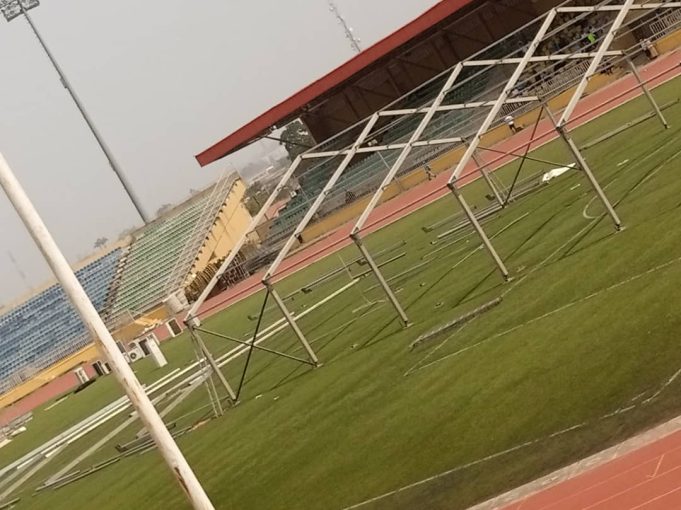 A letter dated December 9th, 2021, was widely flying around various social media outlet last night. In the letter by the League Management Company LMC, directed to the chairman, Kwara United Football Club stated that the company “cannot grant approval for Kwara township stadium to host matches of NPFL 2021/2022 season until the damaged synthetic is replaced”.

As Football lovers, do you know what this new development spells for us? You don’t know. Let me tell you; In that letter, LMC has practically told us that for the whole of 2021/2022 season, no one in Kwara would witness the Nigeria footballing action. Except, of course, you’re rich to travel to a distance none of us knows yet. Sad! Very sad!.

This very development, I believe, Governor Abdulrahman Abdulrazaq will not fancy, considering the fact that we had to bought our way back into the Nigeria Professional Football League immediately after relegation. My belief is he won’t be happy about the development, but I don’t know if he’s really pained as I am at the moment since he’s a great contributor to “Kwara United playing its 2021/2022 league matches home away from home.

On the 9th of December, Kwara State Government had organized a laudable program to celebrate Kwara women who had over the years broken barriers across several walks of life, tagged Cracking the Glass Ceiling: The Story of Kwara Women. The program is impressive. I love it. Our women need to be celebrated. In fact, I spent nothing more than five hours at the program venue. The venue of the program was nowhere else than the Kwara State stadium—shockingly, on the synthetic grass – the pitch.

If you think I’m going to be discussing who were invited and who were not, like my people would say; you will sleep there. If you think, I will remind you that the same KWSG who cracked our synthetic grass rejected the proposal of Durbar committee to use the same facility for the Ilorin Annual Durbar for the year 2021. You are still going to sleep there. I won’t do that. I’m a sharp dude.

In all fairness, the synthetic grass at the Kwara stadium has been due for a replacement since about four years, that’s before the coming of this administration. You’re asking how I know this? You should. I tell you, I’m a footballer and I have played on that very turf many times that I can’t remember. I knew how it was when it was first renovated, I knew its state as at the period of last administration, and I know how it has been since the coming of this administration.

But then, it’s only right to tell KWSG that the usage of that synthetic grass for Cracking the Glass Ceiling has actually cracked the synthetic pitch. Yes, the pitch was in a bad condition before the program, still, it was very inaccurate and haywire to mount such marquee canopies on a pitch that is wearing out. It was an abuse of priority to have had so many wheels of motors matched the synthetic in such a way that you’ll think that place wasn’t meant for football.

Meanwhile it’s very heartbroken, low and wretched to see some people, of course, Kwara youth who are no doubt lovers of football, but as a result of their political inclination and hunt for crumbs, stands tall in all corners and fronts taking verbal sticks and bullets for Kwara state government on the illogical crashing of our synthetic grass. They joke too far to say it’s government property and can be used for what he so likes, I take this question to your doorstep now, why can’t the government take football matches to Banquet Hall? After all, Banquet Hall is a government property. The shame is on you, anyways.

If there is a reward football lovers have gained from the program Cracking the Glass Ceiling, it certainly would be that KWSG has successfully cracked our synthetic grass, and consequentially taken out our beloved Kwara United Football Club out of our sight. Fortunately, I learnt that the renovation of the pitch was incorporated in the 2022 Budget, but why do we have to destroy the pitch before it is renovated? I am not convinced that’s acceptable. If anyone should destroy completely an asset of his before renovation, shouldn’t we say such person is illogical and trifling.
I sincerely hope KWSG finds a way to clear the disgusting mess they have created for Kwarans and football lovers across the state.

On this day 2020, at the popular Nicon Luxury Hotel in Abuja, I was awarded as the best campus sports writer in the whole of Nigeria at the 3rd edition of Campus Journalism Awards powered by Youth Digest. Truthfully, I never dreamed of a moment like that because I’ve never seen myself as a writer – not even now. I just do writings whenever I feel like. But then, such recognition deserves to be celebrated. Yesterday, the 4th edition of Campus Journalism Awards was held and another set of Campus journalists were awarded. I congratulate each and everyone of you. Especially, my friend from Naira Sports who was up against me last time out. That you won the best campus sports Journalist for the year 2021 shows how committed you’re to sports Journalism. I love your resilience and dedication. I even appreciate the fact that you’re the one succeeding me.

Equip children with sports to avoid criminal activities in the country, Taekwondo grandmaster

AFCON: Nigeria, Egypt qualify to the next round