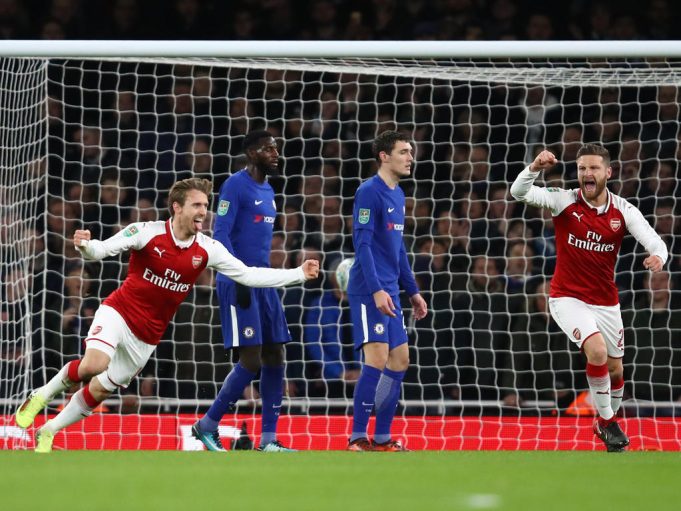 Arsenal set up a mouthwatering League Cup final against Premier League leaders Manchester City on Wednesday, coming from behind to beat Chelsea 2-1 on aggregate as Arsene Wenger targets his first ever victory in the competition.

Pep Guardiola’s City reached the Wembley showpiece the previous evening by beating Championship side Bristol City 3-2 in the second leg of their tie and 5-3 over the two legs, staying on course for an unprecedented quadruple.

Arsene Wenger was unable to field the cup-tied Henrikh Mkhitaryan, who joined the club from Manchester United earlier this week in a swap deal with Alexis Sanchez moving in the other direction while Ross Barkley made his debut for Chelsea as a first-half substitute.

The victory is a major boost for Wenger in a week when the club, facing a struggle to qualify for the Champions League, lost Sanchez, arguably their most devastating attacking player.

Wenger has an outstanding record in the FA Cup with Arsenal — even though they crashed out of this season’s competition earlier this month — but has never won the League Cup, which he has often used to blood young players.

Antonio Conte’s Chelsea, missing Alvaro Morata and Cesc Fabregas, had the better of the first half and had already had a goal ruled out for offside by the time Eden Hazard opened the scoring in the seventh minute after Pedro released him through the middle.

But Arsenal levelled just minutes later after a bizarre Antonio Rudiger own goal. Nacho Monreal headed powerfully goalwards from a corner, which then took a double deflection off Marcos Alonso and then Rudiger, leaving Willy Caballero flat-footed in the Chelsea goal.

Willian was forced off before half an hour and Conte threw on former Everton player Barkley for his Chelsea debut.

A rejuvenated Arsenal started the second period on the front foot and edged in front in the two-legged tie when Granit Xhaka reacted quickly to prod home a deflected Alexandre Lacazette cross with about half an hour to go.

Alex Iwobi had a golden chance to seal the win with about a quarter of an hour to go but Caballero made a fine save to keep Chelsea in the tie.

It was the fourth time the clubs had met this season, with all four previous matches ending in draws, including 0-0 in the first leg.