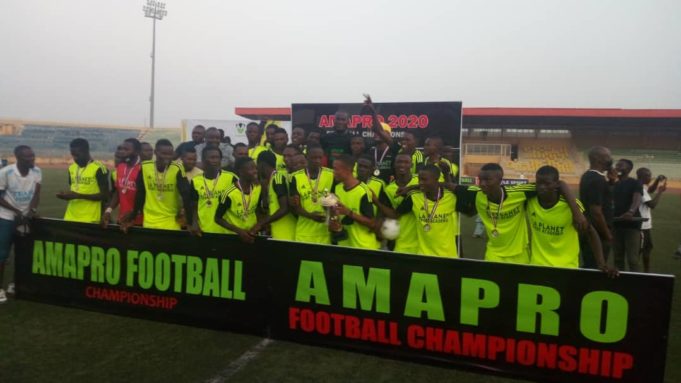 The Ilorin based side maintained their unbeaten run to emerge the champions of the 2020 Amapro football championship on Sunday 8th of November as they defeated Non-leaguers 2 goals to 1.

Afolabi Abdulkareem had put the Non-Leaguers in to the lead in the 26th minutes before Ahmed Bashir equalised in the 77th of the game.

Malik Lawal separated the side in the 81st minutes with his sublime placing to give La Planet their first trophy since existence.

The match played at the Kwara Stadium Main Bowl saw a classical performance from both finalists proving thier worthiness in the presence of fans and supporters alike.

Tijani Ahmed in the first half lost a penalty for La Planet as they struggle against Non-leaguers before regaining back their dominance in the second half of the encounter with plethora of goal chances to show for it.

Earlier before the game,  a novelty match which held between the friends of the organizer of the scouting championship, ‘Shogo Shodunnke and Friends’ and Excell All Stars ended goaless draw.

Some of the guests at the event includes the chairman of Kwara State football Association,Mallam Abdullahi Musa Thuraya, Director of Football ABS Ilorin FC, Alloy Chukwuemeka, Proprietors of 36 Lions FC and Abraysports Alhaji Gafar and Abdullahi Yusuf, Director of Sports,Kwara State Alhaji Alarape Atanda and Director of Economic Affairs,Kwara State Governor’s office, Alhaji Gesinde Fregene and a host of others.

Amapro, Amateur and Professional Football championship is an initiative of Shogo Shodunnke, CEO of Phreestyle Sport. The tournament, with aims to bridge the gap between grassroots players and professional started in 2016.

The scouting championship has so far produced 62 professional players with 9 gone for trials abroad and 7 now with top flight clubs in the Nigeria League.

Also, two players from this year’s Amapro are currently undergoing trials at a top professional club in Nigeria after their scintillating performances during the championship.

NFF in the mud, website showdown as qualifier draws close