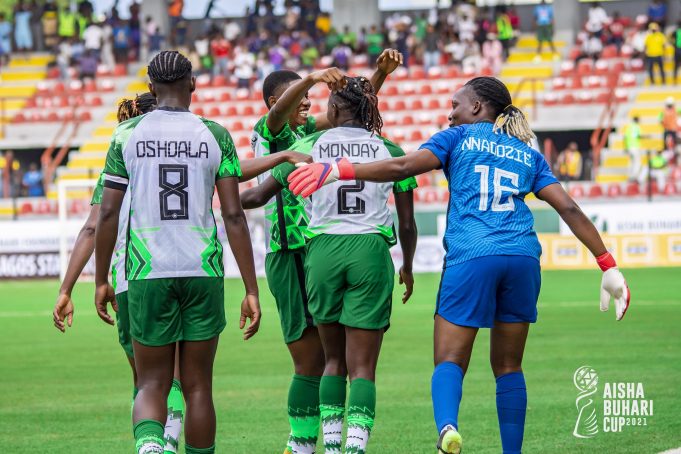 The match was a thoroughly entertaining final, in what, as Nairasports has been reporting was a fitting end to an outstanding tournament.

South Africa had the majority of possession in the opening stages and they deservedly took the lead in somewhat fortuitous circumstances as Michelle Alozie puts the ball into her own net.

The first penalty of the tournament was awarded to South Africa in the 16th minute after Onome Ebi stretches her arm too wide in the air to touch the ball.

Linda Motlhalo makes no mistake in converting it as she sends Nnadozie the wrong way.

Gabriela Salgado makes it three for the Banyana Banyana after a brilliant run from Thembi Kgatlana one minute before halftime.

Second half started on a good note for Nigeria, they were highly spirited and half time substitute, Ikechuckwu Vivian taps in a low cross into an empty net.

Ikechuckwu Vivian scored again with a long range effort that caught Swart Kaylin unaware from the edge of the penalty area to reduce the deficit.

With both teams pushing each other hard, the southerners dents all Falcon’s hope of comeback when referee Souley Zouwaira pointed to the spot and Makhabane Mamello converts it to seal the win for Banyana Banyana.

The win means the visiting South Africans topped the Points Per Game (PPG) table ahead of Morocco, Nigeria, Ghana, Mali and Cameroon.

Banyana Banyana finished the tournament as the only team to win both games after they saw off Ghana 3-0 on Matchday 3.

Atlas Lionesses of Morocco finished 2nd while Nigeria finished third ahead of Ghana courtesy of a single goal difference.