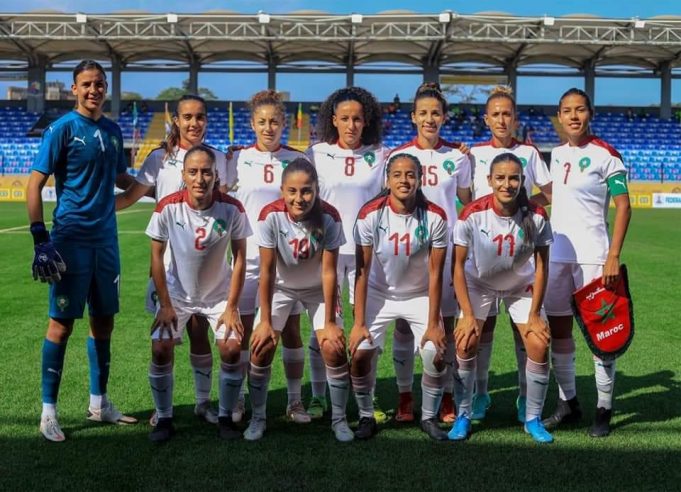 LAGOS, Morocco pipped the Indomitable Lionesses of Cameroon 1-0 on match day two of the Aisha Buhari Cup at the Mobolaji Johnson Arena on Thursday, Nairasports reports.

Tagnaout Fatima was the heroine for Morocco as her solitary strike in the 78th minute was enough to give the Atlas Lionesses the win.

The loss leaves Gabriel Zabo’s team in dire state to produce a positive result after Olympics qualifiers heartbreaking loss to Zambia in the CAF Women’s qualifying tournament final and subsequent loss in the inter-continental play-off against the Chile.

Zabo was appointed on June 18, 2021 to replace Alain Djeumfa, with a mission to uplift the performance of the team going forward.

Unfortunately, the build-up to his first outing wasn’t the best as he only spent most time in camp with the local players and only met the experienced bunch of players plying their trade abroad on the eve of the first game.

Contrastingly, after the appointment of French International and two-time UEFA Women’s Champions League winning manager, Reynald Pedros late last year, the Moroccans are yet to taste a defeat.

This makes it three wins on the throt for the ambitious nation with relatively low records in women’s football and a compliment to the efforts of the Moroccan Royal Federation of Football (FRMF) and its President, Fouzi Lekjaa to develop women’s football in Morocco.

The North Africans are now the second team to record a win in the six-nations invitational tournament after the Super Falcons beat Mali 2-0 in the opening match on Wednesday.

Nairasports reported that a late brace from Robo Queens captain, Gift Monday sealed the win for the host nation.

Hostilities will continue in the tournament with Banyana Banyana of South Africa taking on the Black Queens of Ghana on Friday.

The Atlas Lionesses will be looking forward to stretching their winning streak when they face Mali on September 19th while the Indomitable Lionesses will look to restore their reputation against a tough Ghanaian side on September 20th after which they will all return home and plan better for October’s 2022 African Women’s Cup of Nations Qualifiers.

Meanwhile, Cameroon Captain, Gabrielle Aboudi Onguene said, “First of all we want to say a big thank you to the organizers of this tournament, it shows that they really love wants to develop women’s football. We wish to congratulate Morocco for this victory, they worked hard and achieved it. They have one opportunity in the game and they seized it. We didn’t take our opportunities, besides we still congratulate them. Let’s forget about the fight on the pitch, in the spirit of fair play, we accept the defeat and congratulate Morocco.”

“This tournament is an opportunity for us to prepare for the October Qualifiers but our team as it is, we have a new coach and we are rebuilding as a new team. But at the same time, that is exactly the reason why we congratulated Morocco and we don’t like fighting here and there. For us we are rebuilding and we know that we will get there.”

Cameroon Coach, Gabriel Zabo also added that, “We knew that we are going to play against a Moroccan team that is very technical and they are going to be falling down on the field every now and then. We dominated and had several chances to put the game to bed but we were either shooting wide or shooting against the post. At the 90th minute they committed a foul the referee waved play on and around the middle of the game in the second half our player fell down on the pitch and the referee also waved play on. This counted against us, but all in all it’s still the game of football.”

“We are rebuilding because we have a lot of young players that are ready to play and we are going to be the great beneficiaries of it. We came in two delegations, some players came from Europe ahead of us and they’ve been here two days before we arrived. We didn’t have the opportunity to train together as a team but when we begin to play together in a competition like this, we will begin to gell and be the great force that we used to be.”

Morocco coach, Reynald Pedros opined that, “We are working hard to get to this stage as there are a lot of players who wants to play with us back home and in Europe. We played because we combined discipline, power, spirit with tactics and that’s how exactly the win came about not with fear.”

“We only managed to win today’s game because of determination, we are not ready yet [for the African Women’s Nations Cup], what we are doing is to work mostly with the girls at home to develop them and get ready so when players abroad join it will be a worthy combination.”

For Morocco Star, Ait Elhaj Hanane “This win means a lot to us because we worked hard for it and a lot of our players are just starting the season so I want to thank everyone. We came here to win, improve ourselves and to see our level of progress because our opponents are powerful teams. For the next game we will play it with the heart and show all Africans that we are here.”

The FIFA approved ranking tournament which kicked off on Wednesday, will end on Tuesday 21st September at the Mobolaji Johnson Arena

Awoniyi bounces back as Union Berlin shares spoils with Stuttgart