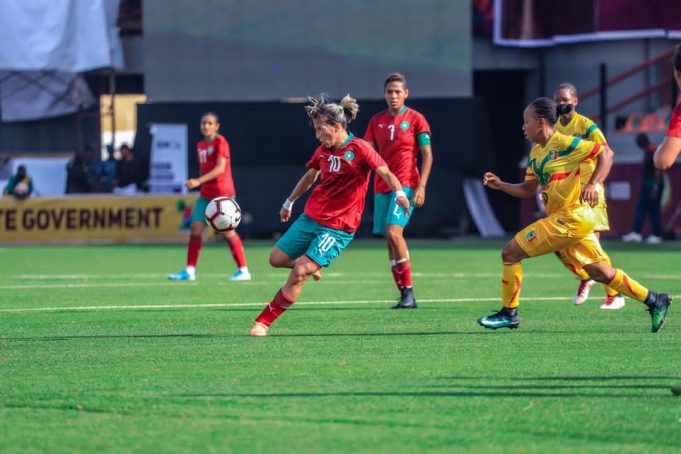 The Moroccans won their first match against Cameroon 1-0 while Mali lost 2-0 to Nigeria.

With three loses from their previous three games, the Lady Eagles needed to avoid defeat and hope result go their way, and they managed to achieved that despite a scrappy performance against a spirited Moroccan side.

Both teams met twice during the last international window in June and the Atlas Lionesses won the double headers 3-0 and 3-2 respectively at the Stade Belvédère, Rabat, Morocco.

Reynald Pedros made four changes to the side that defeated Cameroon by handling a starting berth to Boukhami Siham, Badri Najat, Mssoudy Sanaa and Salmi Rania.

Malian head coach, Houssein Salloum named an unchanged starting XI to his side that lost to Nigeria on the opening day.

As the 22-year-old was running down the flanks to make crosses, Malian defenders found ways of countering her attempts.

It was a defensive style of play from the Malians as they sat back and plotted to punish the Moroccans on counter through their paced forward, Aissata Traore.

The Guingamp star didn’t fail to deliver, though goals eluded her but she was an explosive threat going forward, having a hand in most of Mali’s attacking build up throughout the game.

Morocco dictated the first half with at least two chances that should have shot them into the lead. Mali were a pale shadow of themselves as they failed to click.

The game had few highlights, the first being a weak long range effort from Sabah Seghir straight at the goalkeeper, Fatoumata Karentao in the opening 45 minutes.

Seghir popped forward again on the flank to deliver a cross to Tagnaout Fatima and Mssoudy Sanaa but the latter heads it inches off the target.

The second half resumed on the same tempo with the Les Aiglonnes upping their game. However, both teams failed to break the deadlock with Moroccan feeling disappointed at the stroke of the final whistle, whilst Cameroon also bowed out with their heads low.

Hostilities will continue in the tournament with the Indomitable Lionesses of Cameroon taking on the Black Queens of Ghana on Monday.