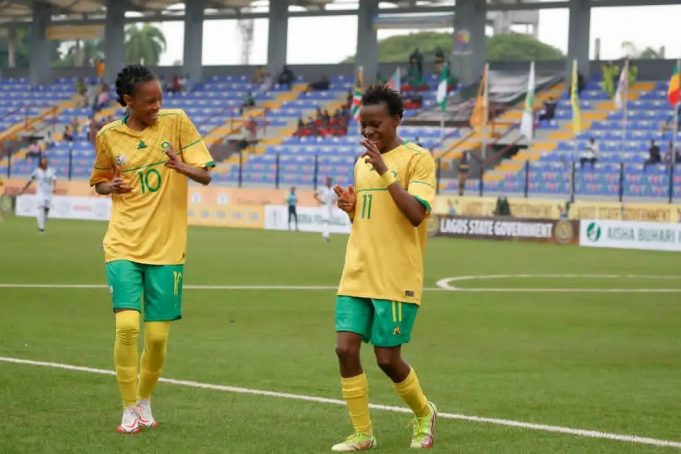 LAGOS – Banyana Banyana were unstoppable in their first match of the Aisha Buhari Cup as they slotted three unreplied goals past the Black Queens of Ghana at the Mobolaji Johnson Arena in Lagos, Nigeria on Friday.

The Black Queens were seeking to get their campaign off to a flying start but that backfired as South Africa outclassed them in a dominant display from start to finish.

Desiree Ellis’ soldiers came into the Buhari tournament after a long layoff due to the Corona virus outbreak that hindered the team’s plans including that of an International friendly against the Netherlands.

Hilda Magaia opened the scoring for the South Africans in the 18th minute by heading the ball into an empty following a Thembi Kgatlana attempt that hits the pole.

The Queens kept pushing in search of the equalizer but an effort by Grace Asantewaa went of the post in the 36th minute.

Elli’s chargers piled up pressure and created more scoring opportunities but were unable to capitalize and extend the lead before the half-time break.

Banyana’s dominant display continued in the second half as Atletico Madrid’s forward Thembi Kgatlana doubled the lead in the 53rd minute through an effortless run down the flank.

The 2018 CAF African Women’s Footballer of the Year who showed class throughout the game brilliantly went round Elen Coleman before rounding up Ghana goalkeeper Fafali Dumehasi to slot home her 20th International goal.

Ghana then made changes to save some pride but got punished again six minutes from time as rising star Sibulele Holweni’s soared above the Ghanaian defence to bury a powerful header beyond the reach of helpless goalkeeper Fafali Dumehasi and sealed the win for Banyana Banyana.

PLAYER OF THE MATCH: Thembi Kgatlana

WHAT THEY SAID
Speaking in the post-match interview Banyana Banyana coach Desiree Ellis revealed that her team started off rusty but gradually got into the game.

“In the beginning I thought we were a bit rusty because we had not played since April and had not seen some of our players since 2019 but the other group has been in training. We created a lot of opportunities.  We will always create a lot of opportunities, that’s who we are and if we don’t concede we have a chance of winning the game”, said Ellis.

“We also showed that we can play a bit of combination play and get players through and as the game got on we got a bit better. Towards the later stages I thought we managed the game very well”.

“We know there is another game coming so we have to ensure that we manage ourselves very well. We made a few changes, our team is very versatile and when we made changes we looked even better”, added Ellis.

“We are very happy with the results but the performance still leaves a room for improvement”, concluded Ellis.

On the other hand, Ghana head coach Mercy Tagoe-Quarcoo didn’t read much into the game after fielding an inexperienced team as they are much more concerned about gearing up for the upcoming AWCON qualifiers.

“We had a good game even though we lost, it’s a preparatory match for Ghana because we have pending important assignment ahead and I brought a lot of new players to test and see how best they can fit in my main team.

“I missed a lot of my players but they also have an equally important assignment out there to perform, what my assistant captain did means when I have the full compliment of my team and we’ll see a different ball game when they are all together.”

Tagoe-Quarcoo continued, “There is nothing embarrassing about the margin, it doesn’t matter. It’s a game you either win, draw, or lose and I’m only here to train because these are preparatory match for me to know where the loopholes are so that I can seal them. I have the main agenda ahead.” She concluded

UP NEXT: The Black Queens are scheduled to take on Cameroon on Monday, September 20 while Banyana Banyana will face hosts Nigeria on Tuesday, 21 September in the last game of the tournament.