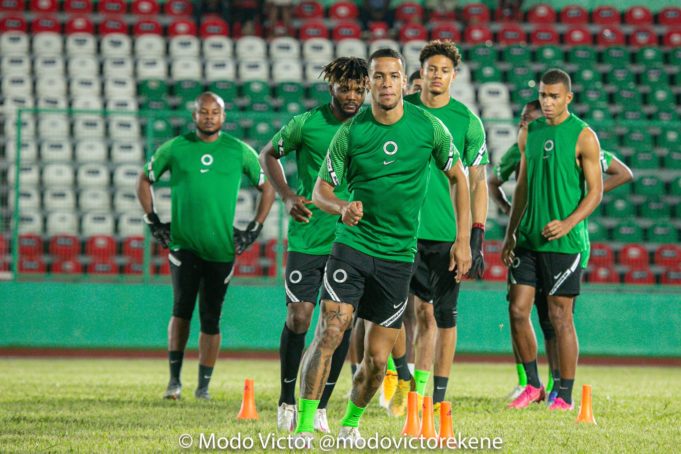 The Super Eagles of Nigeria will continue their quest to qualify for the 2022 Africa Cup of Nations (AFCON) qualifiers when they trade tackles with the Leone Stars of Sierra Leone on Friday at the Samuel Ogbemudia Stadium in Benin.

The coronavirus pandemic has devastated the sporting calendar in ways that have never been seen before, with exactly a year separating Nigeria’s first and third qualification matches for AFCON 2022.

Eagles had earlier defeated Benin Republic 2-1 and Lesotho 2-4 away from home in the opening fixtures of the qualifiers.

After the suspension of Football across the globe, Nigeria returned with two International friendlies against African champions Algeria and Tunisia in Austra which ended 1-0 and 1-1 respectively.

The last meetings between Nigeria and Sierra Leone was ten years ago where Nigeria defeated Sierra leone 2-1 in an international friendly.

Both sides have played each other 14 times in the past, with the Super Eagles winning nine times, while the Leone stars boast of two victories with three draws.

Napoli forward Victor Osimhen already boasts three goals from Nigeria’s opening two matches, with the 21-year-old netting from the spot in a 2-1 victory over Benin before bagging a brace as the Super Eagles swept aside Lesotho 4-2 on matchday two.

Sierra Leone will welcome Kei Kamaraback to the squad after the 36-year-old reversed his decision to retire, and the Minnesota United man is set to start up top.

On another positive note, captain Umaru Bangura – who has recently recovered from COVID-19 – has shrugged off concerns over his fitness to make himself available for Friday’s clash.

The form of the two sides heading into the encounter, Nigeria are highly unlikely to slip up and will feel capable of notching up goals.

Lets have your predication as well