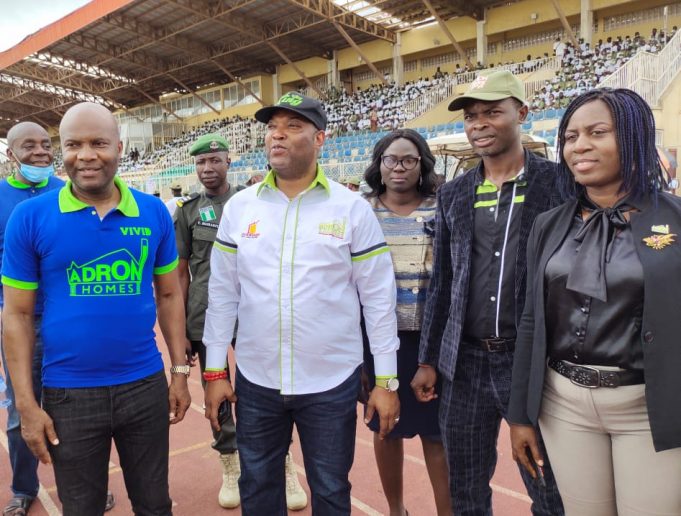 A real property company, Adron Homes set to partner the Ogun state government on the renovation of the Sagamu International stadium Ahead of the fifth edition of the Adron Games.

The Games slated for November 18, 2021 at the gateway stadium, sagamu Ogun state.

The Chief Executive of Adron Homes, Aare Adetola Emmanuel King told newsmen in Sagamu on Wednesday after inspecting the stadium in preparation for the annual sports festival.

Adetola who expressed satisfaction with the facilities at the stadium noted that his company would take up the responsibility of renovating some sections of the stadium destroyed by rainstorms.

He said he would meet with the State Ministry of Youths and Sports on the possibility of branding all stadia in the state by his company.

Adetola added that Adron Homes was using the Games as a catalyst to encourage more governmental and corporate participation in sports.

“Sport has a rallying effect in most cultures, and it is big business all over the world. We created these Games as a means of fostering friendship and unity among us as a corporate organization, and also among us as a nation. To that end, the Games are held in a different state every year, on a rotating basis

“There is a need for a facelift in some section of the stadium and that is one of the reasons we are here to inspect this facility towards the preparation for the event.

“We picked sagamu because we go round the last one we did was held in Ibadan and now we are coming to Ogun state, it is either we pick Abeokuta or Sagamu

“I have been investing in sports for a long time, this is the fifth edition and we have been able to establish the fact that people need to keep fit so that we can discharge our responsibilities and the outcome of the COVID event and era have taught us to keep fit.

“We will help the state government to renovate the stadium, it will be a symbiotic project, we have always been doing that and partnering with state government, so we will do it.”

According to him, some of the events lined up for the 2021 edition are wrestling, cycling, track and field – which has athletes split into four teams — and an eight-team football tournament.