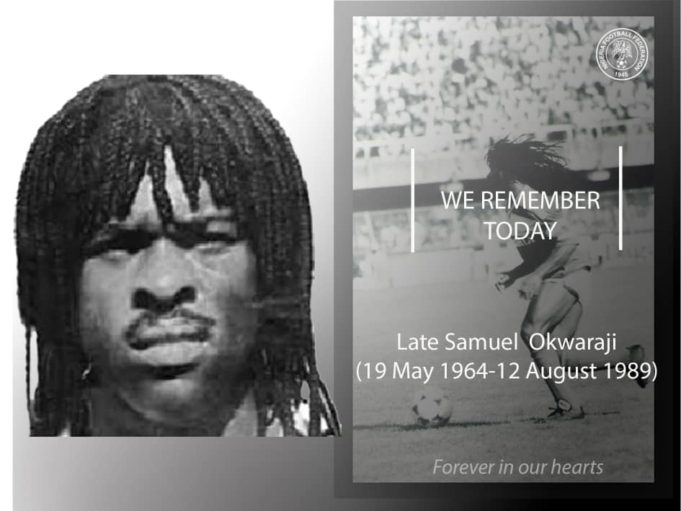 Samuel Sokuchuwa Okwaraji, was born on May 19, 1964, in Imo state. Okwaraji, played for As Roma, Dinamo Zagreb, Austria Klagenfurt, VfB Stuttgart, SSV Ulm and Kon.Berchem Sport during his lifetime. Okwaraji, died of suspected heart failure, while serving his fatherland on August 12, 1989, during a World Cup qualification match between Nigeria and Angola at the National stadium in Surulere, Lagos.

Samuel Okwaraji, years later became the most talked Nigerian footballer. No thanks to “our fathers, uncles and brothers” who passed down the fable on famous Nigeria vs India match. There are different versions to this story, but here’s mine.

“I grew up learning about the famous match between Nigeria and India that ended 99-1. History passed down to me had it that, Nigeria struggled in the game due to the superior powers of India with Voodoo or Juju. Ball turned into stone, lion and all manners of things. After scoring 99, India, agreed that if Nigeria scored 1, then they will automatically win the match. Nigeria got a penalty and Sam Okwaraji bravely stepped up to take the kick. He ignored the warnings of the coach who told him to use his left leg (since he had a ring on it), but opted to use his right. He scored, but immediately collapsed and died on the pitch. Okwaraji though lost his life, but became a big hero after the goal.” There are different versions to this story, but all versions must include India scoring 99, Samuel Okwaraji’s death.

Who concocted this fable arguably is the greatest story-teller and content creator. How we believed this story, such that it passed to generations after remains a mystery, even after the internet came. The story also withstood the test of time, as a no one has seen India take part in the World Cup or football tournament.

The truth behind India’s non-appearance at the mundial, is due to the fact that they have never qualified, asides 1950 by default, yet failed to take part in that competition. India currently has a football league, known as the Indian Super League (ISL). The league has paraded some of the finest football players in the past years, including Roberto Carlos, Nicolas Anelka, Alessandra Del Piero, Robert Pires, David Trezeguet, Andrian Mutu, Kalu Uche, among others.

31 years after, the memories of Samuel Okwaraji and the stories still lives with us. His death should not only be about fable, but to start a movement to forestall the circumstances surrounding his death in Nigerian football.