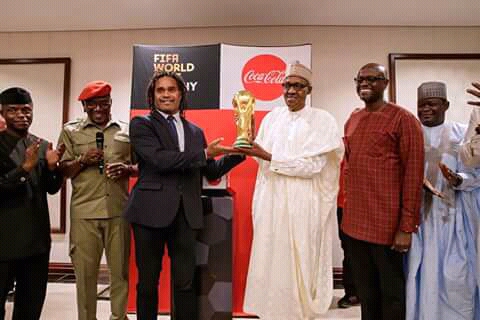 FIFA World Cup winner Christian Karembeu has tipped the Super Eagles to be one of the standout teams at the 21st FIFA World Cup finals taking place in Russia this summer.

The Les Bleus legend, a member of France’s 1998 World Cup –winning squad, made this assertion at a world press conference held in Abuja yesterday to welcome the original World Cup trophy to Nigeria.

He is the FIFA Representative accompanying sport world’s most recognizable diadem on the fourth Coca-Cola FIFA World Cup Trophy Tour.

“Yes, we know there are a number of strong African countries in the game but Nigeria has always been a great footballing nation, and they have an exciting team heading to the FIFA World Cup in Russia.

I have played alongside and against so many Nigerian players and I can attest to their strength and ambition.

I believe the present Super Eagles squad is capable of great things,” said Karembeu, as he congratulated the President of NFF, Mr. Amaju Pinnick on the Super Eagles’ berth in Russia 2018.