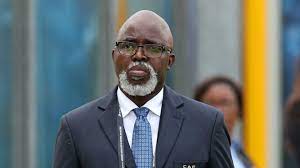 Nigeria’s contingent to Friday’s 2022 FIFA World Cup qualifying showdown with the Black Stars of Ghana landed at the Kumasi International Airport on Thursday morning, with a confident and ambitious squad of players who look forward to appearing at football’s biggest showpiece in Qatar later this year.

The contingent was led by President of the Nigeria Football Federation and Member of the FIFA Council, Mr Amaju Melvin Pinnick, with some Members of NFF Executive Committee, the NFF General Secretary, some members of Management and Staff, a couple of parliamentarians, some stakeholders and a few media representatives. Technical adviser Augustine Eguavoen led the coaching and administrative staff of the team while Skipper Ahmed Musa was at the head of a 25-man playing body.

The Air Peace’s 124-seater Embraer E195 aircraft took off at the Nnamdi Azikiwe International Airport, Abuja and landed in Kumasi after 80 minutes, with the delegation received at the airport by Nigeria’s Deputy High Commissioner to Ghana, Ambassador Gambo Yusuf Hamza. He stood in for the High Commissioner, Ambassador Eket Ibok.

Also in the reception party were staff of the High Commission, officials of the Ghana Football Association and former Ghana defender and captain Sammy Kuffour.

At the arrival hall, Pinnick asseverated that the delegation has come to a battleground for a war that it cannot afford to lose.

“We are here for a battle and we must retain that focus and that mentality. The World Cup ticket is a big prize.”

Technical adviser Eguavoen said his troops are set and would only aim at victory when the match commences at 7.30 Ghana time (8.30pm Nigeria time) on Friday.

Victory over the Black Stars on Friday would vitiate the potential for an explosive encounter at the Moshood Abiola National Stadium, Abuja on Tuesday.

Nigeria have participated at six of the past seven FIFA World Cup finals, missing only the finals in Germany in 2006, while Ghana have only played at football’s major spectacle only three times – 2006, 2010 and 2014. The Eagles are staying at the Golden Tulip Hotel.

President of the Nigerian community in the Asante Region of Ghana (which includes Kumasi), Okafor Martins Chukwudi, toldthenff.com that the community is ready to swarm into Ghana’s second city on Friday to cheer the Super Eagles to victory at the Baba Yara Stadium.

“We are fully mobilized. We have been working in tandem with the Nigeria High Commission and we will storm the stadium in great numbers.”