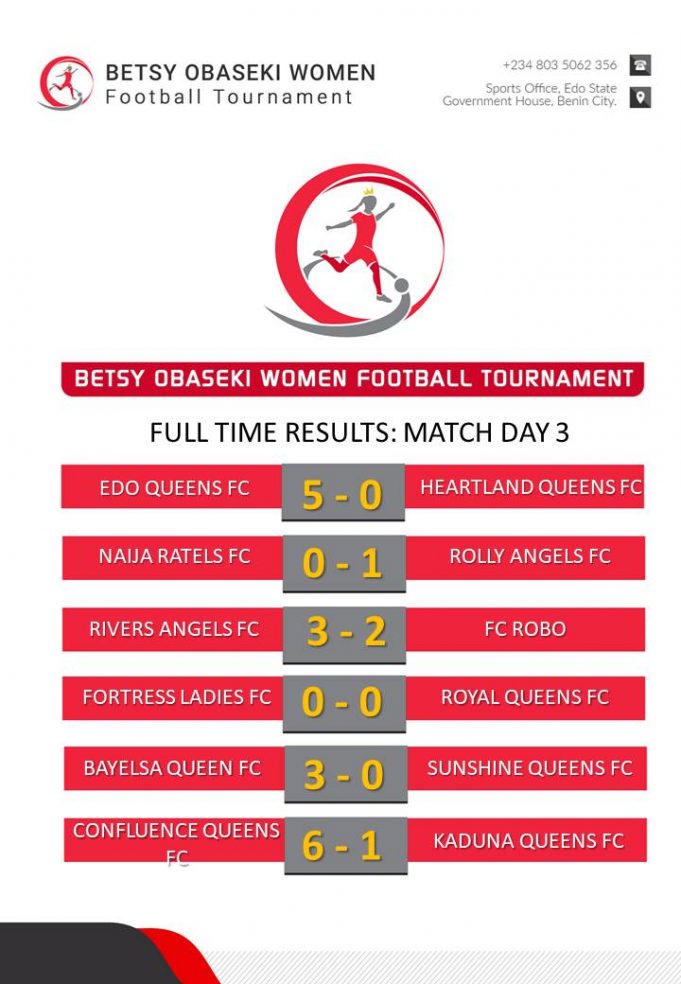 Edo Queens put an impressive performance today as they thrashed Heartland Queens 5-0 in the last match of Group A to set up a semi finals clash with NWFL champions Rivers Angels.

The coach Matthew Wmimo led Edo Queens could not have settled for anything less than such a 5-star performance as they played as they played in the presence of the Deputy Governor of Edo state and the first lady Betsy Obaseki.
Edo Queens took the Owerri girls to the cleaners with five unreplied goals,courtesy Emmem Essien’s brace, Elizabeth Zirike’s second half long range stike and two ealy goals from Rebecca Ajumudaand Adaobi Okah respectively.

On the other hand,Rivers Angels were fantastic and proved why they are League champions as they came from behind to beat FC Robo Queens 3-2 to pick the semifinals ticket.
However, it is not over for FC Robo as their credentials look good enough to get the best Group runners up ticket to join the top clubs in the semifinals battle scheduled for Saturday..

Meanwhile, the wife of the Deputy Governor of Edo state Mrs. Marriann Philip Shaibu has congratulated the participanting clubs,organisers and the first lady Betsy Obaseki for the initiative and success recorded so far in the women preseason Football tournament.
She expressed confidence in the first lady and husband that the tournament will be sustained.
She highlighted the huge benefits of the tournament to include continuous fight against girl child trafficking and abuse and promotion of women football in the country.

On calls for catch them young tournament to encourage younger girls to take career in football, Mrs Shaibu said: “Well I am not a politician but only a wife of the Deputy Governor of Edo state. I cant talk much about Edo government’s next plan but I am unaware that the first lady and my husband are already discussing how to do that in the state. ” She said.

Pinnick Reveals How much NPFL TV will generate