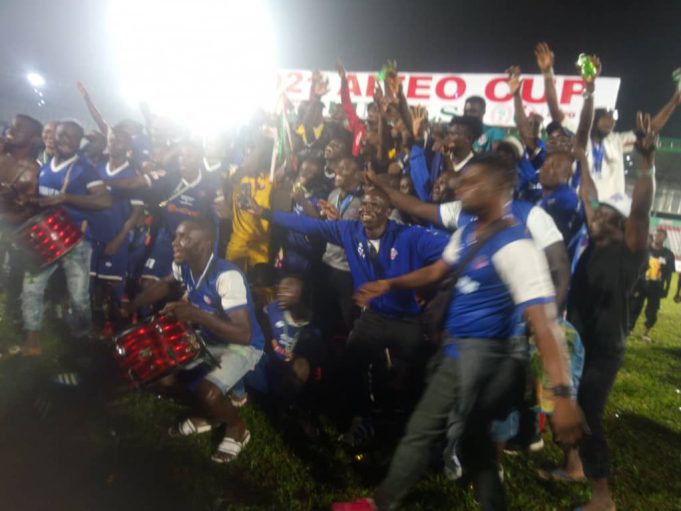 Nasarawa United hopes of playing continental football was yesterday blown away  after going down 3-4 on penalties to Nigeria National League side Bayelsa United in the 2021 Aiteo Cup final.

The encounter was decided at the Samuel Ogbemudia Stadium, Benin City on Sunday evening.

Okardi Inikurogba 19th minutes strike saw the the Yenagoa based team race to the lead after Nasarawa United goalkeeper Mohammed Galadima indeciveness to handle the ball but their celebration was cut short within the space of 60 seconds when Chinedu Ohanachom strike leveled score.

Both teams showed purpose in an entertaining early exchanges but Nasarawa United showed more hunger and took the lead in the 26th minutes when Adamu Aliyu tailored in a through pass from Silas Nwankwo to send the solid miners fans into frenzy.

The Restoration boys didn’t relent in their pursuit to restore parity equalise as their efforts paid off in the 36th minutes the restoration Emo James headed in a corner kick to level score at 2-2.

The rain soaked game went into the interval with no further goals.

On resumption from the interval, Bayelsa United made a double substitution in the 53rd when Robert Mizo and Tombiri Bina both came in for Bernard Okorowanta and Victory Berniangba to solidify the defence and reinforce attack.

In the 68th minutes Silas Nwankwo’s thought he had scored the decisive goal but cannoned a low drive shot that narrowly evaded the near post after beautiful turn half turn inside the area.

Both teams searched for the winner proved abortive as full time score stood 2-2 and then proceeded to penalty shootout with Bayelsa United winnig on 4-3.

“Kudos to my boys for not relenting so soon after they conceded the second goal,” said Bayelsa coach Dieprey Teibowe told NAIRASPORTS

“Throughout the match all I did was to motivate my boys. Nasarawa is a big team and they played impressively in the first half, what I did was to bring a defensive and attacking midfielder to reduce the tension at the midfield.

“We have been together for a while which helped our style of play,” Teibowei concluded.

Meanwhile, Captain of Bayelsa United Ebitimi Agogo said the motivation grew when they defeated Gateway FC. The paramount thing is promoting to the NPFL next season.

“Nobody is perfect in penalty kicks.” It unfortunate we couldn’t meet the desired target after a long season,” said a disappointed Bala Nkiyu.