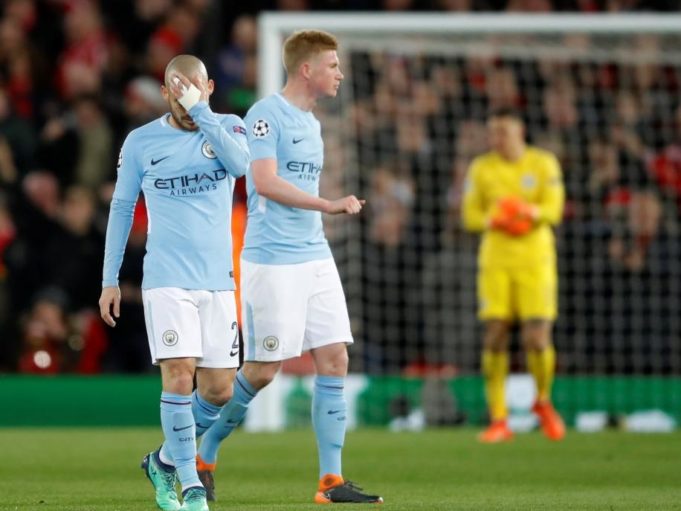 A victory for City against neighbours United at the Etihad Stadium on Saturday would seal the Premier League title after a trophy-less first season in charge.

In normal circumstances, winning a derby to secure the league title would be the undoubted focus, but Guardiola acknowledges that he has to have one eye on the second leg of their European quarter-final against Liverpool three days later.

City are on the brink of exiting the Champions League after losing 3-0 in the first leg at Anfield on Wednesday.

With the second leg coming up on Tuesday, Guardiola is trying to keep his players fresh for their European challenge.

“It’s a different competition,” he said. “We are thinking about recovering the players, about playing in front of our fans, creating a good game to put them (Liverpool) under pressure.

“They’re almost qualified but we have 90 minutes. The door is almost closed but a little bit open and maybe there is some space for us to get in.”

Guardiola suggested that he would keep his options open regarding team selection, but is expected to rotate his squad over the next week.

“We have three massive games — United, Liverpool and Tottenham,” he said. “We have just a few days between each game.

“We have to see the condition of the players. We will have a training session and we’ll speak with the docs and see what’s the best team. We’ll pick a team to win the game against United.

“We are going into it to win it. We have one eye on Tuesday though.”

Guardiola is unlikely to risk top scorer Sergio Aguero, who has not played since suffering a knee injury during a training session on March 10.

The City manager is refusing to commit himself publicly as to whether Aguero will be fit for the Liverpool game but will give the striker every chance to recover.

Guardiola believes a good result against United — in addition to securing the title — would give his players just the boost they need for the return against Liverpool.

“Tomorrow, no matter what happens, we’ll have six more chances,” he said. “Everything is an influence, but I’d rather be facing United with a better result than we had. We must adapt, though.

“The result against United will help emotionally to prepare for the game on Tuesday.”