“`CLE 37 | 27 | 27 | 17 | 108“`
Cavs missed 15 of their 16 shots in the 4⃣th period leading to a 20-6 Golden State run, which eventually resulted in another disappointing result for Cleveland.
The men in wine-n-gold entered the 2⃣nd half with a 7-point advantage, following a strong 64-point 1st half. But the 4th quarter⏱ had a different story altogether. LeBron finished with a solid 32pts/8rebs/6ast on the stat-sheet, while KD matched up with similar numbers(32pts/5rebs/8ast) to solidify his claims that he is at par with The King’s skills, if not better. Curry shot 53% overall and made a contribution of 23 points along with 17 more from his Splash Brother, Klay Thompson.
Isaiah Thomas played a healthy 32 minutes, but could only manage 19 points shooting 8 of 21 from the field. Cavs resurgent efforts were visible throughout the game, owing to the age-old  rivalry they have with the Warriors. There was trash talking, LeBron’s mentoring, back and forth runs and Draymond’s jibes after baskets, but none of that matters as it was evenly distributed on both sides.
Warriors improve to 36-9, which is the best record in the league at this point in time. On the other hand, Cavs slip to 26-17 at the 3⃣rd position out east, just a game ahead of Miami in the standings.
Cleveland & Golden State have played against each other twice this season, both resulting in GSW wins. The next time they face off would be in the NBA Finals, that is if both teams manage to reach it this year. 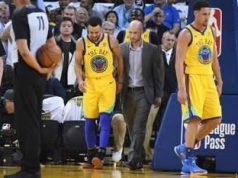 ​Major Fight Breaks Out Between Afflalo & Bjelica, Punch Followed by...