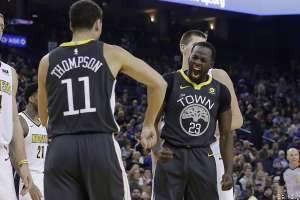 The Warriors will display their talent of riches once again. For the second consecutive year, the Warriors will feature four players in the NBA All-Star game in what marks the first time in NBA history such a thing has happened for any team.
Warriors forward Draymond Green and guard Klay Thompson were named among the reserves for the 2018 NBA All-Star game on Feb. 18 in Los Angeles, as voted by NBA coaches. Last week, Warriors guard Stephen Curry and forward Kevin Durant were named starters. This marks just the ninth time overall in NBA history that a single team will have four players in the All-Star Game.
In a move to bolster both fan and player interest in the NBA All-Star game on Feb. 18 in Los Angeles, Curry and LeBron James were named as captains after leading the NBA in fan, player and media votes. James will pick first and then Curry will select second among a handful of starters that include Durant, Giannis Antetokounmpo, DeMar DeRozan, Kyrie Irving, Joel Embiid, Anthony Davis, James Harden, DeMarcus Cousins.
James and Curry will then fill out their roster by picking alternatively among a group of reserve players, including Thompson, Green, Russell Westbrook, LaMarcus Aldridge, Jimmy Butler, Damian Lillard and Karl-Anthony Towns. 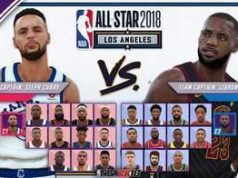