Enyimba forward Victor Mbaoma has advised the League Management Company (LMC) to hunt the choice of playing Super six during a cheaper and far safer option with fewer games and straightforward control of logistics.

Former Remo Stars Captain speaking  said further that footballing decision is taken within the light of the probabilities of others winning the league also which the highest placed team Plateau united can’t just be awarded the title without handing others the chance to also compete for it.

“We have the chances as well for us to win the league, so for me, it’s a better chance, let every other team have equal opportunity to fight for the trophy.

“So I’m in support of it. So I think that Super six is better and it’s safe too. It’s much safer than playing the whole league. Let us all go and fight for it and let the better team win.” he told Brila.net 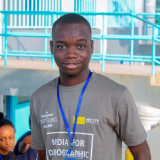